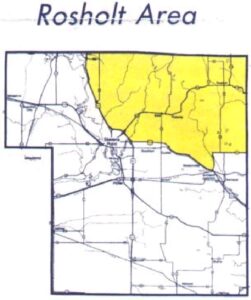 Taken from TOWN 25 NORTH
by Malcolm Rosholt
which is available in a true to the original, hard cover book
for $40 plus postage or pick up at the village office. 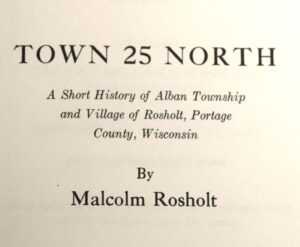 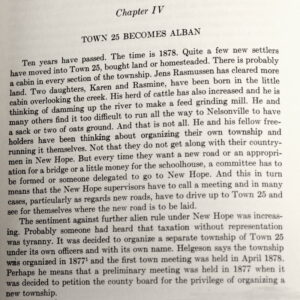 In the 1800's Rosholt was part of Town 25 North. A man by the name of J. G. Rosholt operated a sawmill in Hitterdal. He saw possibilities investing in timber. He moved his machinery to Town 25 North. He made a deal with Jens Rasmussen, who owned a feed mill, to share the water rights on the South Branch of the Little Wolf River. He built a sawmill adjacent to Rasmussen's feed mill on the east side of the pond.

Rosholt continued to invest in timber. 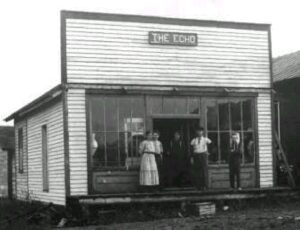 Several years before 1900, rumors were going around that a railroad maybe coming into Alban. J. G. and Brooks & Ross Lumber were very instrumental in bringing the railroad to the area. Things started to happen in Town 25.

Buildings began to spring up around the sawmill. Additions were added onto the mill.
Business was good.

On September, 1901, the mill burned to the ground along with Rosholt's log cabin, dry kiln and blacksmith shop. Mr. Rosholt did not have insurance on either the lumber or the mill. The fire also burned Jens Rasmussen's barns, granary. 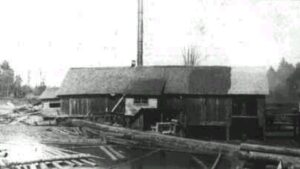 A larger mill was built in 1901-02 on the south shore of the pond just below the icehouse. The mill was sold to Maxwell Lumber Company.

A post office was established March 2, 1893 in the Jens P. Hanson store on main street. The people had to come up with a name for the settlement.

Many names were tossed about until Rosholt, named for J. G. Rosholt, was decided on.

On November 19, 1921, the bank was opened for inspection. Just a few of the other building at that time were, the creamery, blacksmith shop, a shoemaker, a couple of grocery stores, feed mill, a millinery shop, harness shop and & the Hanson House, which was a hotel. A two-story building went up in 1903 by Wolding-Olson Hardware, and the Alban Mercantile Company. This was a busy little community. The mill employed more than a dozen men.

People enjoyed dancing at each other's houses. The Red Hall was a place for parties and various events. There was a 4th of July celebration with a parade.

The men were either caught or killed.

June of 1903 was recorded as when the first survey and platting started in the village. Election of officers for the village was held April 7, 1908.

J. G. Rosholt elected President. Many records were lost in a fire in 1947.

Children from the village were attending Alban School. It was decided to build a one-room school west of town. It became small within a few years and a second floor had to be added. Olson's Hall held the commencements.

In July 1915 work had begun on a new brick building to house the upper grades.

In 1925 it was officially declared a high school.

With the coming of the railroad, Rosholt was growing. Lumber and potatoes were the number one businesses. About October 15, 1903, the whistle of the first train in the village could be heard. It was known as the Rosholt Flier with engine No. 932. People would take Sunday afternoon rides on the train.

A fatal train wreck on February 12, 1904 caused damage when it overshot the end of the train tracks and nearly ended up in the creek. Engineer Dan Costello was killed.

The train ran for many years later, but in 1956 it stopped.

The Rosholt Women's Club was very active in 1907. Trips to Kiolbassa Lake for a picnic. There was a city band called the Rosholt Cornet Band.

A small ski scaffold stood at the fair park on the north side.

In 1921 The Rosholt Advancement Association and The Portage County Guernsey Breeders Association decided to hold a picnic at the Hill Park.

Later it was named Farmers-Merchants Picnic to be held on Labor Day. It was later changed to the Rosholt Free Community Fair. It is now know as the Rosholt Fair (Official Portage County Fair). It has expanded to 4 days and is a youth fair. The area 4H Clubs and FFA Organization show their animals and exhibits that they have made. The days are made up of many things, such as music, rides, stage shows, bingo, animal market sale, judging of animals and other exhibits, a demolition derby and many things to eat. A museum which consists of a log house, granary, schoolhouse and sawmill. This is visited by many people.

Now lets step into the present. The village has changed. We have lost many businesses due to the fact one can get into their car and drive to the big cities or towns to get whatever they want. A new fire station which serves Townships of Alban, Sharon and the Village of Rosholt. We have a beautiful new addition onto our school. Plays and music programs are presented in the auditorium. We have a nice big gymnasium. A new band room for our growing numbers of students. A library to accommodate the public.

We are very proud of our village. We do have dreams for the future.